Just over a year ago, having accepted an offer to work at Docker and on a short break before starting, Jess Frazelle wrote this awesome post on running your applications out of Docker containers. Jess talks about the benefits of the Apple App Sandbox and it sounds cool (it is), but Apple doesn’t give you the controls on Mac OS that they do on iOS, so an app can broadly define the permissions it requires, not to mention people still install software from all over the internet.

You shouldn’t be trusting that software. If you haven’t read it already, you should add Future Crimes by Mark Goodman to your reading list. The first quarter of the book is a terrifying account of the unregulated data broker industry. We all know Facebook, Twitter, Google, etc.. aren’t really free, but that doesn’t mean we should give them free access to all the data on our personal computer. We can make it a good deal harder for their software to scrape information by using containers to isolate applications both from the host, and from eachother.

So, using Jess’s post as a starting point, I wanted to create a more native experience of running an application in a container. What do I mean by this? I run Gnome 3 as my desktop environment, so I want: 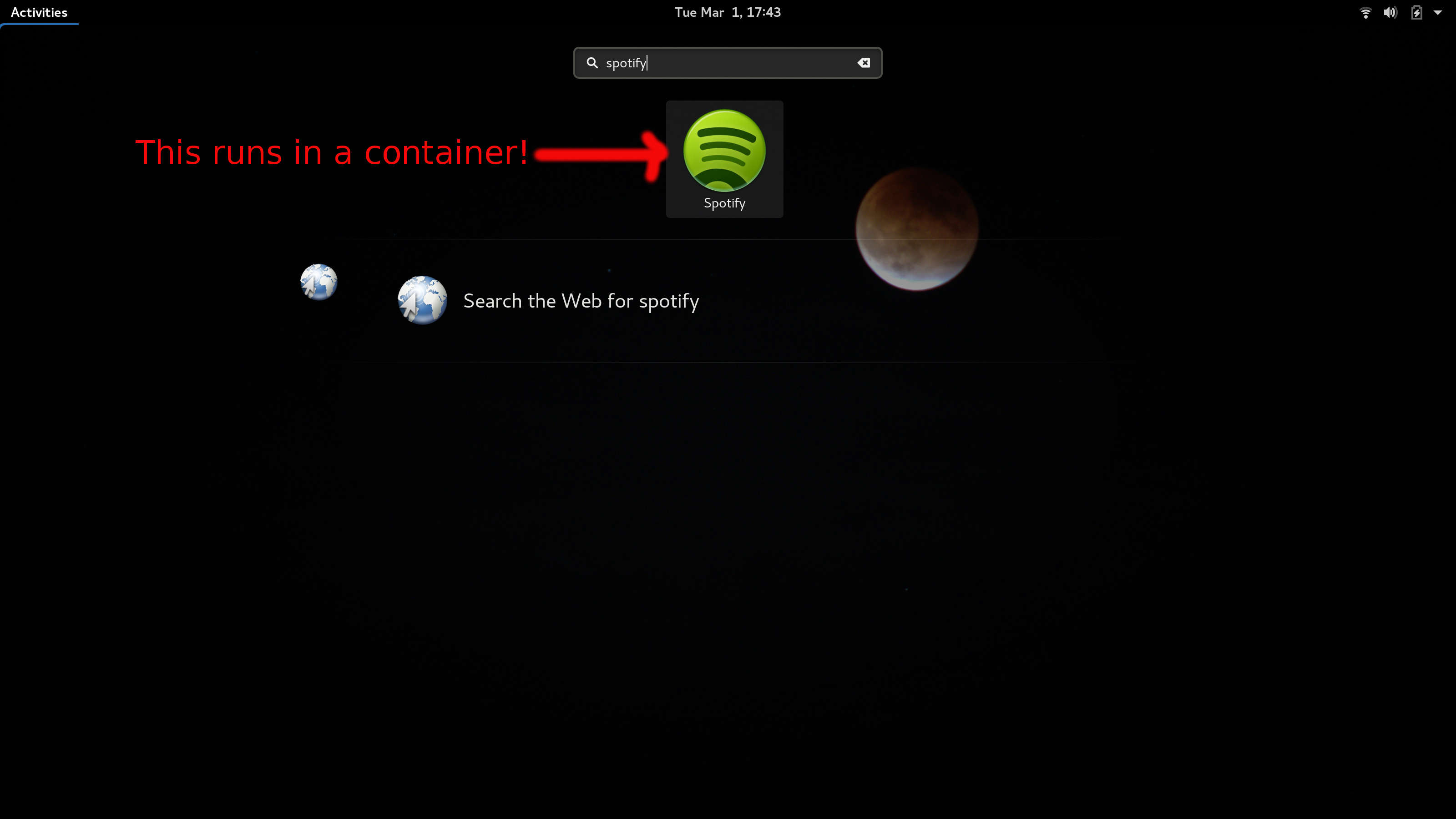 I’m going to use Spotify as my example app and we’ll tackle those 3 requirements in order. First, let’s define a Dockerfile that will build our spotify image:

Build this Dockerfile and for the sake of having a concrete name throughout the rest of this post, I’ll assume you tagged it as spotify:latest. Handling our first want is easy, we just need to add --rm to Jess’s version of the command. Note I’m also using pulseaudio, so I mount my host’s pulse socket to the location I defined as PULSE_SERVER in the Dockerfile above:

With –rm, when we close spotify (and kill it from the task bar), the container is cleaned up, allowing us to cleanly relaunch the application. We also mount in a volume for spotify to use for the various bits of data it caches, this allows us to benefit from spotify’s caching and credential storage across restarts, again making it seem more native.

Now that we have our image and a container that cleans itself up, we want to add an application launcher for our container. While poorly documented, or at least, a little tricky to find an entry point for, adding things to the Application menu in Gnome is trivial. Gnome uses “Desktop Entries”, a freedesktop.org standard for defining how an application is launched, and how its menu entry looks.

This is a reasonably minimal desktop entry. Breaking it down, all desktop entry files start with [Desktop Entry]. The Name will be used as the application’s label in the menu. Icon defines the icon’s filename minus any file extension it might have. Exec is the command the be run when the application launcher is activated. Finally, Terminal defines whether the application needs to be run in a terminal (spotify does not).

The icons are defined beside the application locations at /usr/share/icons and ~/.local/share/icons for the system and user level configuration. According to my testing an icon must be placed at the same level as the Desktop Entry file that uses it; i.e. a system level desktop entry means the icons must be placed in the system level icons folder. Within those icons folders you’ll find folders for different themes, which in turn contain folders for different sized icons, and finally, you’ll want to add your icon to the apps folder within each size folder. My (filtered) icons folder looks like this after adding my spotify icon in varying sizes:

N.B. png is the best supported icon image format. You can use the convert tool from imagemagick to change your icon from another image format via convert input.ico output.png

With our desktop entry and icons in place, the app should now show up in our application menu and be launchable (N.B. I had to restart X11 to make the icons register, not sure why). It’s time to deal with the final item on the list. The docker commands provided will have worked for you as is if you followed the docker docs and created a docker group, with root permissions and added your user to it. I don’t do that, I don’t trust myself to not run some command, like rm -rf / when I’m not paying attention and break my system. More to the point, I don’t trust certain co-workers not to come up with some really sneaky ways to screw with my system in the ever escalating pony wars!

So, it breaks the “make it native” theme a little, but we can use a variety of tools to create an interative GUI version of sudo. On Gnome, you’ll want to use gksu (or gksudo). If you use gksu, you’ll need to configure it to use sudo under the hood (N.B. do not run this command as root):

We can just update the Exec command in our spotify desktop entry to add this command and we done! No need to restart anything on this one, just relaunch the app and you’ll be greeted with a popup that asks for your password.